The United Nations Sustainable Development Goals are set to be achieved by 2030, but we are behind schedule — here are three things we need to change. 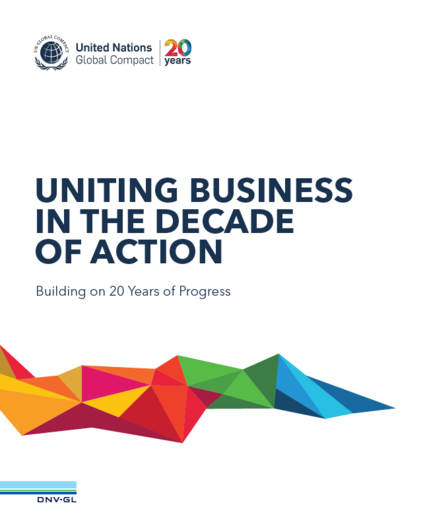 “The world has endured an extraordinary amount of disruption over the last 12 months,” remarked Chief Executive of DNV GL Remi Eriksen at the UN Global Compact Leaders Summit, which marked 20 years since the establishment of the United Nations Global Compact.

In the summer of 2019, children across the world organized ‘climate strikes’ to protest the lack of action on climate change — a threat that is having the most significant effect on the younger generation. That was followed by wildfires in Australia, which caused untold devastation, and then the global COVID-19 pandemic. In the wake of the pandemic came global Black Lives Matter protests against racial injustice.

It was against this background that produced a report for the 20th anniversary of the UN Global Compact, examining the progress of the UN Global Compact towards achieving the 17 UN Sustainable Development Goals (SDGs or also called the Global Goals), which were launched in 2015 and cover everything from eliminating poverty and hunger to sustainable management of forests and oceans. The report warns that “with 10 years to go, the world is not on track to achieve the SDGs. We need a Decade of Action to reverse this predicament”.

During the Summit, speakers quoted “the scale of change to date to deliver on the SDGs has not been big enough or fast enough.” Overall, the session outlined three main changes that companies must embrace if the world is to meet the Global Goals by 2030.

Despite the fact that over 90 per cent of companies participating in the UN Global Compact have adopted the Ten Principles of the UN Global Compact, the report found that the Principles alone are not enough to drive change. For example, 62 per cent of signatories have conducted an environmental impact assessment compared with just 18 per cent that have carried out a human rights assessment. Companies, therefore, need to go beyond stating their commitment to the Ten Principles and ensure that they have processes in place to enact change.

Similarly, when it comes to the Global Goals, findings from the report showed that companies tend to focus a lot of attention on just a few goals — with most companies emphasizing the same one. Firms are most likely to focus on Goal 3: Good Health and Well-Being, Goal 8: Decent Work and Economic Growth, Goal 9: Industry, Innovation and Infrastructure, Goal 12: Responsible Consumption and Production and Goal 13: Climate Action.

Companies urgently need to put in place plans to make progress on the other Global Goals not mentioned above. They must also integrate these policies across their supply chain to drive bigger change; just 17 per cent of companies participating in the UN Global Compact require their supply chain partners to adhere to the Ten Principles.

To date, the scale and pace of change has not been big enough or fast enough as the report found that companies could be more ambitious; less than a third of companies believe that they are moving fast enough to achieve the Global Goals and just two-fifths of businesses (39 per cent) have set corporate goals that are sufficiently ambitious, science-based or aligned with societal needs.

Moreover, companies were far less likely to recognize their negative effect on SDGs compared with their acknowledgement of their positive effect. Therefore, it is essential to accelerate positive change while also reducing or eliminating negative impacts.

Only 46 per cent of businesses are embedding the SDGs in their core operations. We need to see the actions fully integrated across all functions and operations to see the change needed to deliver these Global Goals.

There also needs to be greater advocacy. Recently, we have seen leading Chief Executive Officers advocating for action on climate change; however, only 29 per cent of companies publicly advocate for action in relation to the SDGs — down from 53 per cent in 2019 — and only 52 per cent are engaging in partnerships with public or private organizations, which is down from 64 per cent.

With five years elapsed since the SDGs were launched, it is time to increase the pace of change. Companies must fully integrate the Ten Principles into their business strategies, operations and value chains. They must also raise their ambitions to achieve the SDGs.

There are several benchmarks for the coming Decade of Action, including gender balance at all levels of management, a living wage for all employees and science-based emissions reduction targets. Other measures include net-positive water impact, zero waste to landfill and incineration and 100 per cent resource recovery.

The changes are ambitious and alongside them, CEOs must integrate them fully across their businesses.

“Failure is not an option,” said Mr Eriksen. “This must be the Decade of Action.”